Peter Weissenfeld and Mark Griffin, along with Rob Johns and Tony Brand recently received they're wings certificate at a presentation in Swan Hill on Friday 19th May. The party flew over to Swan Hill after work on Friday and received they're certificate at a function with over 100 guests. Well done all of you and may you have many happy and safe hours of instucting ahead of you. 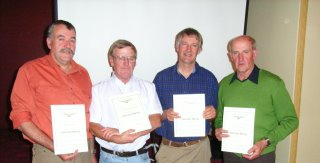 Mark, Peter, Tony and Robert are pictured after receiving there certificates.

Posted by HFC Blog Editor at 7:52 am No comments:

This month we welcome another two new member to the club. Wayne Jackson is principal of Horsham West Primary School and therefor PWs boss. So now Peter is teaching him to fly the Jabiru. Wouldn't you like to be a fly on the wall when Peter's annual performance review gets done. Our other new member is Leanne McCulloch-Ball. Leanne is from Netherby. Please make Wayne and Leanne welcome and introduce yourself when you meet them for the first time.

Do You Get Mail?

Do you receive 'The Fly Paper' through the post? Do you have an email address and haven't told us about it? Its cheaper, faster and the newsletter has a better visual quality when you receive it via email. About ten members currently have their newsletter posted out to them. So if you currently receive a copy of the the newsletter by post and you have an email address please let Steve Schneider or Michael Hogan know so you can be included in the email list. Steve's email address is sschneider@onaustralia.com.au and Michael's is mphogan@ncable.com.au

Mark has pointed out a little error from the last 'Fly Paper'. A key stroke mistake was made by yours truly while typing in the account number for the clubs ebanking details. Instead of typing in 1000 6008 as the account number I typed 1060 0008. This has since be fixed in the weblog and I have included the correct details for direct deposit to pay your club accounts.

The correct details you require to make a direct payments to the clubs banks account are:

To help Mark identify your payment on the monthly statement we should all adopt a standard approach to the 'To Account Description', which describes the transfer on the clubs monthly statement. I would suggest the following format. First initial and surname followed by the words flying fees, for example 'MHogan Flying Fees'. Its simple really if you have the correct details in the first place. I apologize to anyone who this mistake has effected. Sorry Steve.

Laurie Bunnik passed through Horsham on Good Friday on the way to the Biannual National Daimler Rally in Bendigo. Laurie has been working on his Daimler for many years now and came up trumps at the Rally winning two awards. His pride and joy picked up the 'Presidents Trophy' and was also awarded the 'New Zealand trophy' for the best presented Daimler. On Easter Monday Laurie again passed through Horsham on the way home to Casterton. He filled up on fuel and took PW and myself for a drive around the taxiway to the fuel bowser's to refuel. As the Daimler runs on leaded fuel, Laurie runs the mighty machine on AVGAS. It was all very regal and stately being driven round in the Daimler, just the sort of 'staff car' the club requires; although it was abit of a squeeze for a big fellow to get it an out of the back. It didn't even try the fount seat.

Generaly Easter was a little quieter compared to some other years. It rained in the afternoon on Good Friday, with PW getting in one flight with a student in the Jabiru in the morning. Then it bucketed down. Saturday was again quiet with just a few people 'pottering around' the club rooms, but no one doing any flying. Easter Sunday was the busy day for the Easter break with the Jabiru flying for over 5 hours with a few students and members enjoying the conditions, which were perfect for flying. Easter Monday was again quiet, apart from going for a drive in the Daimler.

It seemed that more flying took place at the model aeroplane club over at Longeranong our the Easter break. The modelers had a competition on and Max, PW and myself drove back and forth from the club to the field days site (the modelers strip) to see what was happening. Lots of little buzzing planes spearing up into the air on the minimum of fuel and seeing how long they could stay up. But not all went well for the modelers, just ask Rolf Hedt. Rolf was putting on a demonstration of his model helicopter when someone started transmitting on their own controller which was on the same frequency. As you might guess, two into one doesn't go and Rolf's helicopter is now in many bits. Rolf's caring father (Max) before he understood what had happened commented, 'What did you do that for?' Needless to say when Max found out what did happen he was so upset and angry he had to leave and come back to the flying club. He was still hopping mad when he told your trusty reporter about the incident. So its time for an upgrade and off to the shops for Rolf.

More good news in the 'Weddings, Parties, Anything' section. Viv Drew and Gary Allbutt got married on April the 22nd. Congratulations to both of you from all your friends here at the Horsham Flying Club.

Easter Sunday was a big day for Steve Schneider, Steve sat his exams for his RA-Aus pilots certificate (and passed). He also went solo in the Jabiru as well. Not only was it Steve's first solo but in a round about way it was his instructors first solo as well. PW has converted a number of pilots to the Jabiru, but Steve is the first that Peter has trained to solo and then cut the apron strings and sent him on his way. So congratulations to Steve and PW.

The Gliding Federation have notified the club that GFA fees' have increased from the 1st May 2006. In summary an individual membership will increase to $187.00 per year from $176.00. To view the full schedule of fees' go to the GFA web site at www.gfa.org.au/membership/currentfees.php All members who are current members of GFA will not have to pay the increased fee until their membership comes due for renewal. As always GFA will sent out individual membership renewal notices.

The June long weekend in fast approaching and the Dadswells Group will be again operating from Colefield at Dadswells Bridge. As the HFC is providing towing for the weekend with TOJ, club gliding operations will also be based at Colefield. The Twin Astir and or the Janus will be ferried down for the weekend. So if you need a check flight or want to organize a flight contact PW on 0419 137 129. Dadswells is a great area to fly around, the Grampians are spectacular and this weekend will be a good opportunity to see how the area has recovered after the fires in January. So come out to the club, there will be a 'mud map' of how to get to Colefield, or better still arrange to go with one of the ferry flights. Jabiru pilots might also take this opportunity to visit a new field and share some flights over the Grampians with friends and fellow flyers.

The next club meeting will be held at the clubrooms on Saturday June 10th from 7.00PM. There will be a dinner before hand at 6.00PM, Lorelle will be preparing the meal. We would appreciate people letting us know ho many will be able to come along. Put your name on the board at the club or let one of the committee know. The minutes of the last meeting held on Saturday 13th May have been included with this newsletter.

Posted by HFC Blog Editor at 7:37 pm No comments:

More good news in the 'Weddings, Parties, Anything' section. Viv Drew and Gary Allbutt, two of our members from the Gliding Club of Victoriag were married on April the 22nd. The club would like to extend to Viv and Garry our hearty congratulations to both of you.

Posted by HFC Blog Editor at 7:51 pm No comments: