Elvis On the Field (Or a Helo that Looked Like Him) 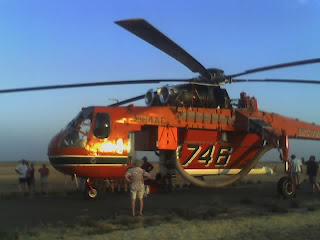 One of the Ericson Skycrain helicopters landed at Horsham Aerodrome this afternoon and stayed over night to be mid way between South Australia and the fires in Victoria. While a few members were out the front of the tug hangar (having a quiet beer) before the meeting, 'Elvis' (although it wasn't actually the one named Elvis, but everyone calls them Elvis) thundered over the hangars and landed in front of Rob Boschen's old hanger in a vast cloud of dust. There is a lot of power in those rotors. People started appearing almost as soon as the engines were shut down. Michael Sudholz reckons he was almost blown off the road as the helo tracked over him as it approached. You can get an idea of the size of this monster when you look at the people who are having a sticky beak. Horsham Flying Club members were right in the thick of it.
Posted by HFC Blog Editor at 10:00 pm No comments:

Jabiru Order Changed to a J230

It seems to be an on going saga but there has been another change in the J160 purchase. The club meeting held on the 9th of December addressed some issues in relation to the purchase of the J160 Jabiru and the replacement of the Pawnee as the clubs glider tug. Much discussion had taken place after the November meeting between committee members and club members of long standing with regard to the proposed replacement of the Pawnee with a Maule or similar type aircraft and the purchase of a new J160. The December meeting focused on the idea of replacing the Pawnee with a Jabiru J230 fitted out for aero towing and not selling the existing Jabiru. Max Hedt has conducted detailed research on this topic and the committee felt that the replacement of the Jabiru and Pawnee should be rolled into one project and the existing Jabiru aircraft retained. The Jabiru company has indicated that our order can be changed and we could expect delivery in around June or July 2007. The club has gone ahead and confirmed an order for a J230 fitted with a tow hook. So does anyone want to buy a used Pawnee with a near new motor? Its for sale for $55,000 plus GST or an appropriate offer. Contact Mark Griffin for full details of the Pawnee sale on 0428 820 007.

Posted by HFC Blog Editor at 9:37 pm No comments: