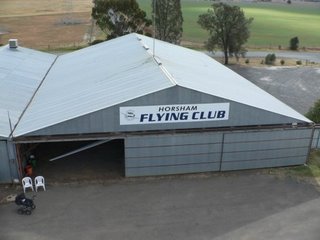 A new sign has been put up on the front of the main hanger facing the taxi way to identify the club to visiting pilots. The sign painting was organized by Michael Sudholz. The sign was put up on Friday 20th by Michael and Doug Brooke using Phil Colquhuon's "Cherry Picker". Well done guys. 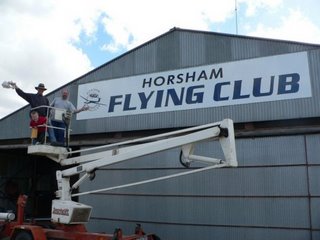 Doug and Kendrell Brooke are pleased to announce the birth of their son Roland Hart Brooke. 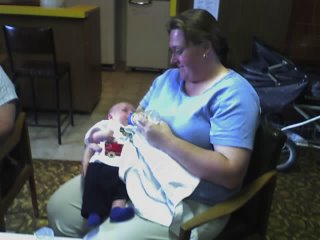 Roland was born with his cord wrapped around his neck and body. Initially he wasn't breathing and had a very low heart rate 30bpm. After a little CPR and with the assistance of a breathing tube he quickly came back to life and now everything is ok. A range of tests were performed and the results are all fine. No damaged was done, which is really good. Doug was a bit jealous that Roland got to have a fly before the Jabiru was finished . I guess Roland wanted to have a go in a turbine engine aircraft (the air ambulance) as his first flying experience at only 5 hours old. Doug, Kendrell and older brother Bevan are pleased as punch with the new arrival to their family.
Posted by HFC Blog Editor at 6:55 pm No comments:

Welcome to a New Member

This month we welcome David Niewand as a new member. David is the son of Arnold Niewand and the Grandson of Eric Boschen. So membership of the HFC really is a family affair for the Niewand's and Boschen's. Both Arnold and David are learning to fly the Jabiru with PW and Mark. Arnold has also recently returned to flying gliders. David has also had a flight in the Janus with Max Hedt and enjoyed the experience. Mark reports that David and Arnold are both progressing well with their training.

Posted by HFC Blog Editor at 9:08 pm No comments: 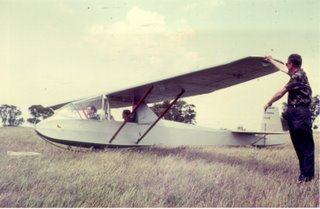 Posted by HFC Blog Editor at 11:55 pm No comments:

The club will have its next General Meeting on Saturday 14th October. The meeting will take place in the clubroom's at Horsham Aerodrome. The meeting should start at around 7.30 PM.

The significant item for discussion will be whether to go ahead and order a new Jabiru J160 for delivery later in 2007.

So to have your say and voice your opinion, be there and be heard.
Posted by HFC Members at 2:42 pm 1 comment:

Club VP Mike Hogan has had another two launches off the winch at the Sunraysia Glidng Club. The second only lasted a minute as the cable broke on the start of the climb. All ended well with a landing straight ahead. Mike thinks that winch launching is OK, but he has also said; "..if god wanted us to winch launch he wouldn't have invented the Pawnee or the motor Janus..."

Stay tuned for more of Mike's adventures in 'Winch Land'.
Posted by HFC Members at 6:30 pm No comments:

Some 18 years ago on the 29th October 1988 Michael Hogan (HFC Vice-President) had his first and second flights in a glider launched by a winch. Back then the flights were made at Sunraysia Gliding Club (Mildura) in a Blanik as part of a club trip to Mildura. On Saturday 30th September 2006 Michael had his third winch launch. This time it was in an IS28 and again it was at the Sunraysia Gliding Club (Mike is also VP of the SGC, as well as the HFC). The flight went well and Mike and Keith Hill 'hung' around at about 1100 feet for around quarter of a hour before landing. Mike's comment was that the launch is still the closest thing to be launched off an Aircraft Carrier by a catapult. Well that's what he remembers from 18 years ago and his third launch re-confirmed that belief. Mike's other comment was that it was great and more people should try it as he will be.
Posted by HFC Blog Editor at 6:40 pm No comments: