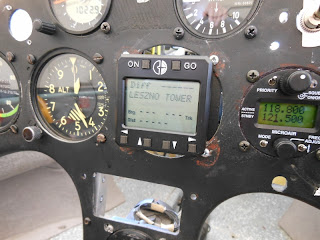 Posted by HFC Blog Editor at 9:03 am No comments:

Welcome to our new members

Over the last couple of month we have had some new members join the club. So the next time your out at the club and you run into someone you're not familiar with; introduce yourself. It might be Bernie Sizer, Adam Howell or Simon Beelitz. So please make them welcome.
Posted by HFC Blog Editor at 8:56 am No comments:

Much progress re-painting the clubrooms

Work on re-painting the clubroom's is progressing fast.The main room is already painted, Pete's cave is waiting ready for the first coat and we're waiting for Max to reinforce the bar wall so that we can patch the holes and pain it as well. New counter tops and window blinds are also on the way and so is the carpet.

There is still a long way to go but the difference is already hard to believe and the room magically started to attract more and more visitors every evening... 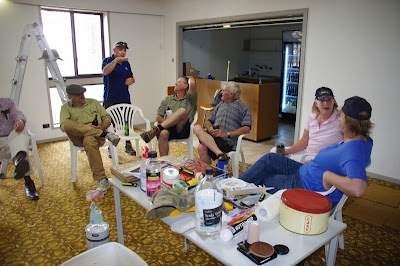 It's already looking much brighter. Thank you to Marta for the photos 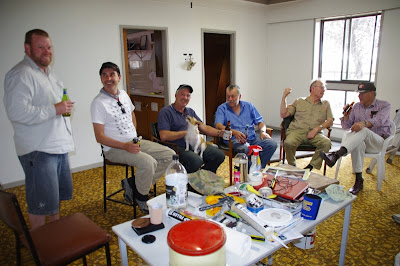 Posted by HFC Blog Editor at 11:43 am No comments:

Peter Weissenfeld (PW) is currently unable to provide flight training in gliders or RAA aircraft. Please contact Marta Najfeld on 0459 124 596 in relation to gliding and Mark Griffin on 0427 887 311 in relation to RAA matters. Peter will let us know when he is able to return to duty.
Posted by HFC Blog Editor at 3:19 pm No comments:

Jabiru J120 Out of Service

The Jabiru J120 is currently out of service after a major engine failure and forced landing near Kalkee last week. There was damage to the engine, propeller and the nose wheel. Repairs are being organized and we will let the membership know when the Jab is returned to service.

Posted by HFC Blog Editor at 3:19 pm No comments:

Air Con for the workshop

The new air conditioner for the workshop has arrived and preparations are underway to sort out the power supply and install the new unit. So lots of little jobs are underway at the moment. So come the Coaching Week and Horsham Week the Workshop/Ops Room will be the cool place to be.
Posted by HFC Blog Editor at 3:39 pm No comments:

Well after many long years the inside of the clubrooms are getting a bit of a spruce up. The room has been cleared, the walls cleaned and Mike and Griffo did some cleaning up. Which means a bit of stuff got thrown out.

Wayne will be filling holes and preparing for painting on Melbourne Cup Day. Painting will take place soon. So on your next visit the clubrooms will be nice and off whitish.
Posted by HFC Blog Editor at 3:33 pm No comments: