Peter Weissenfeld CFI with Airwego has reported that Wayne Jackson one of the clubs newest members is now our newest Jabiru solo pilot. Wayne achieved his first solo flight on Sunday 18th June 2006 at Horsham Aerodrome. Wayne was flying in the clubs Jabiru 55-0933. Well done Wayne on your achievement.

Kelvin Mills a member of long standing with the club and completed his conversion to ultralight/light sport aircraft. Kelvin has completed his required training and now has a RAAus Pilot Certificate to add to his list of flying credentials. Kelvin is a Tug Pilot and gliding instructor. In recent times Kelvin has been completing his Commercial GA License. All your friends and fellow club members wish you all the best in your flying pursuits.
Posted by HFC Blog Editor at 7:30 pm No comments:

Another club member has gone solo in a Jabiru aircraft. Bill Fry achieved his first solo in April. Bill has been under going his flight training with Cliff Banks of Sun Centre Ultralights of Swan Hill. Given the Australian fondness for nick names and play on words, Bill who is the Lutheran pastor at Natimuk is sometimes referred to as 'Friar Tuck'. Well done Bill on your solo.

Peter Kelly back from overseas

Peter and Sherylyn Kelly have recently returned from a five week trip to Spain, Portugal, England, Ireland and Thailand. Going on what Peter had to say they had a great trip, although PK thought London was very expensive and that was after the $200 'tapas' meal in Spain. Peter also thinks fuel is cheap here after what he paid in Europe. Peter did get to meet all sorts of interesting people while in London, here he is pictured with one of the worlds lesser known despots. The people you meet up the street when you're searching for a quiet drink. 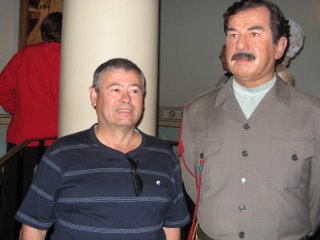 And Joe off overseas again with everything, including the kitchen sink

Joe Luciani is heading back to Italy again in July to carry out some more work on his Italian home, Joe has dismantled a complete kitchen and packed it into a trailer to be sent by ship to Italy. The boat takes 45 day to reach Genoa in Northern Italy. Joe will pick up the trailer and its load and tow it south to his other home near Rome and put it all back together again. Everything is included, stove, fridge, pots, pans and also includes the kitchen sink. Joe will be away until September. While in Europe he will also be catching up with his fiancee; Elizabeth Wells. Liz is coming out to Australia in March next year when Liz and Joe will be marrying. We wish them all the very best. If building a trailer and dismantling a kitchen is not enough, Joe is also rebuilding a damaged LS6, helping Phil with his Jabiru J230 and Doug Brooke with his J170 all before he heads off in July.

Its all speed ahead in the Jabiru construction stakes. Phil C is well along the track of painting his J230 in Joe's painting booth, the wings a basically finished and last weekend Phil was busy sanding back and filling the fuselage prior to painting. Phil camped at the club over the long weekend and everywhere he went he left a trail of fine white dust. Phil loves sanding. He was all smiles most of the weekend. Doug Brooke has bolted ahead with his project. Only a few weeks ago the kit was being brought back from Bundaberg. 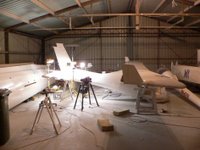 Now its got the fin attached, the elevator in place, the wings are all assembled and have been test fitted on the fuselage and soon the painting, filling and sanding will start. Bevan is keeping a close eye on the project and has found just the place to keep an eye on things. Sitting in the cockpit. 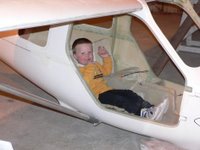 The long weekend was the first Dadswells weekend for the wave season, there are three more this year in July, August and September. A number of pilots and their gliders attended from Benalla. The weather was cold with a few good flights made in average conditions. The club's Janus and the Pawnee attended and a few club members flew and well as a number of visiting pilots who required a check flight at Colefield to familiarize themselves with the strip and the area. The next weekend at Colefield will be on Saturday 15th and Sunday 16th July. An option that members might consider is being put forward by Michael Hogan, Peter Kelly and Peter Weissenfeld. There is an Indian Restaurant at the Dadswells Bridge Motel and we a looking at staying Dadswells on the Saturday and having a meal at the restaurant. So if you are interested in joining us contact, either PK, PW or Mike. Also contact PW about flying at Dadswells, the Janus or the Twin Astir will again operating from Colefield. Jabiru pilots are always welcome to drop in as well.

There has been some concern about identifying when the Jabiru is out of service and confusion about maintenance being carried out on the aircraft. It has been decided that when the Jabiru is serviceableness that the cowl be removed and some form of red 'flag' be placed over the control column. Phil is currently investigate a suitable 'flag'. So if there is no cowl on the Jabiru, 'No Fly'. Pilots should contact the Jabiru maintenance officer, Phil Colquhuon for any updates on the aircrafts serviceability.

This handy hint on how to access your local AWIS (Aerodrome Weather Information Service) in the air via your mobile phone comes from former member Daryl Hooke.

AWIS provides a facility for pilots to access real time meteorological observations from Automatic Weather Stations (AWS). The observations can be accessed via phone or, at selected locations only, via radio transmissions.

AWIS uses pre-recorded spoken words to broadcast the real time parameters collected by the AWS including wind, pressure, air temperature, dew point temperature and rainfall. At locations where ceilometer and vismeter sensors are available, the AWIS will report cloud amount and height and visibility.

AWIB/AWIS Phone numbers are found under MET. Information on many ERSA aerodrome pages. Particularly if using a CDMA mobile reception may be possible some distance from relevant aerodrome while in the air. The AWIS number for Horsha Aerodrome is 03 5381 0257.

Daryl's handy hit is to use the “Ted King” mobile connection ie. Use a simple hands-free wire (available at Strathfields $7.95). Place the earphone bud in your ear and place wire microphone in your headset ear cup. Leave your intercom on and you can use the boom mike to talk on mobile as well as being able listen to AWIS.

Posted by HFC Blog Editor at 6:37 pm No comments: 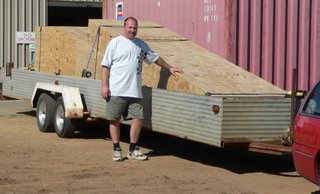 Posted by HFC Blog Editor at 7:09 am No comments: