Details of the first four aerotows completed by the club's new Jabiru J230-D at Horsham Aerodrome.

Flight No. 1, Saturday 1st September, 1600 hours.
Wind 9-10 kts from the North. Temperature about 15 C. Takeoff from runway 35 on firm dirt with short grass with a length of 800 metres. The Jabiru was carrying about 1/2 fuel with an estimated TOW of 510 kilos. Mark Griffin flew the Jabiru and Max Hedt was solo pilot in the club's Grob G103 Twin Astir 2. The estimated TOW of the glider was 490 kgs. Thermal activity during the flight was very low. The following is Max's summary of the flight. 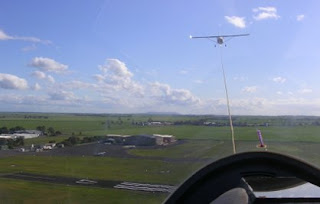 Mark won the hot seat as the tug pilot for the first tow. My job in the Twin was a lot easier as all I had to do was stay out of trouble in a familiar aircraft. After lining up the aircraft most of our mob took off down the strip to get photos and watch the lift off. That left Steve Schneider and Doug Norman to organize my launch.

After some discussion it was agreed that Mark should set the flaps at about 1/3 down for the tow. Mark carefully took up slack until I gave him the "Lets Go!" over the radio. Initial acceleration was a little better than I expected with only 120hp in front of us. The Twin got airborne quite quickly after a hundred plus metres.

But once up to about the 45 to 50 knots it seem that the acceleration slowed down and the Jabiru took quite a while and a fair bit of strip length to become fully airborne at about the 60 to 65 kts . Once airborne the tow became easy with the Jabiru quite stable in front. Mark was trying a 70 kt tow speed but found the climb better at about 75 kts. The wake turbulence was a lot less than the Pawnee and I found it easy to stay in a position just below the Jabiru slipstream. The reference for this position were the elevators lining up with the wings.

Flight No. 2, Saturday 1st September, 1620 hours.
Wind 9-10 kts from the North. Temperature about 15 C. Takeoff from runway 35 on firm dirt with short grass with a length of 800 metres. The Jabiru was carrying about 1/2 fuel with an estimated TOW of 510 kilos. Mark Griffin flew the Jabiru and Steve Schneider was solo pilot in the club's Grob G103 Twin Astir 2. The estimated TOW of the glider was 490 kgs. Thermal activity during the flight was very low. The following is Max's summary of the flight. 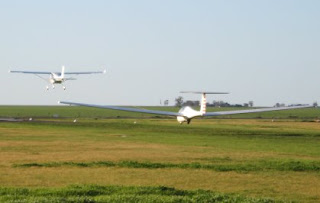 I offered the flight to Steve and had to dodge to avoid getting run over as Steve headed for the cockpit! Again the Twin got off the ground in a reasonable distance but the Jabiru stayed on the ground even longer than the first flight. The flight was completely normal to the extent that Steve took a couple of photos of the Jab in front just after becoming airborne. The release height was again 2000 ft AGL. Time by the watch, 9 minutes ground to ground for the Jabiru.

Flight No. 3, Sunday 2nd September, 1530 hours.
Wind 15 kts from the West. Temperature about 16.5 C. Takeoff from runway 26 on firm sealed strip with a length of 1330 metres. The Jabiru was carrying near full fuel with an estimated TOW of 550 kilos. Mark Griffin was again the tug pilot The club's Grob G103 Twin Astir 2 was flown solo again by Max Hedt. The estimated TOW of the glider was again 490 kgs. Thermal activity during the flight was again very low.

Take off normal, but even on the sealed strip the Jab's take off run to get airborne was quite long. Mark started some gentle turns after about 700 to 800 feet and I had absolutely no trouble to staying in position. At 1500 feet, I suggested to Mark that we try a high tow to check the effects on the J230. I carefully eased up through the slip stream to a high tow position. The reference here was the Jabs wings were just below the horizon. Mark later reported that there was no readily perceptible change in the attitude or performance of the Jab when the Twin was in high tow. 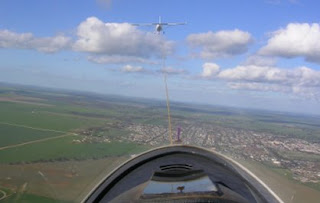 I descended to low tow and moved out to an extreme tow position out to the left off the Jab. Mark reported no problems and he still had some rudder left. I repeated this out to the right. Again, no problems. I then descended into a very low position which students can sometimes get into. I was uncomfortable to be in such a low position. Mark later said that the Jab started to slowly porpoise in pitch so we were getting close to the position limit in low tow. The release was right at 2000 ft. AGL. This flight was timed by stopwatch. The time from the start of the ground roll to release at 2000 feet was 6minutes and 26 seconds. The rate of climb for this flight was an average of 310 fpm. The Jabiru's time ground to ground was 10 minutes and 20 seconds.

Wind 15 kts from the West. Temperature about 16.5 C. Takeoff from runway 26 on firm sealed strip with a length of 1330 metres. The Jabiru was carrying near full fuel with an estimated TOW of 550 kilos. Mark Griffin was again the tug pilot The club's Grob G103 Twin Astir 2 was flown for the first time two up by peter Weissenfeld and Steve Schneider. There was moderate thermal activity. The following are the observations by Max and then Peter.

The usual long ground run from the Jab. The Twin got airborne after a moderate ground run. The release height was again 2000 ft AGL. The time from start of the ground roll to the release of the Twin was 6 minutes and 55 seconds. The time for the jab, ground to ground was 9 minutes and 55 seconds. Mark's comment was that it was quite a grind to get up there but when the figures are looked at, it only took another half a minute of climb with two up as against one up to reach 2000 feet. Average rate of climb including ground run with two up in the Twin Astir and near full fuel in the Jab was 290 fpm.

Peter first impressions of the Twin launch with 2 people on board was that “the acceleration was very slow with a long ground run. It took quite some time to even get the nose wheel off the ground. With a good headwind we had plenty of clearance over the fence. Once airborne the glider handled as normal. Climb rates varied between about 6ktsfont> and 1kt as there were moderate thermals and sink around”. 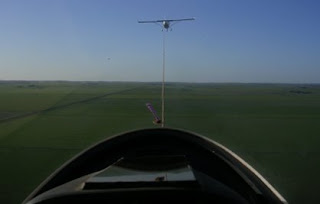 Some general observations from Max Hedt.

Posted by HFC Blog Editor at 6:45 pm No comments:

Click on the play button to view a short video of the first aerotow launch of the club's Grob Twin Astir by the J230. Mark Griffin is flying the Jabiru and Max Hedt is in the glider.

Posted by HFC Blog Editor at 11:21 pm No comments: 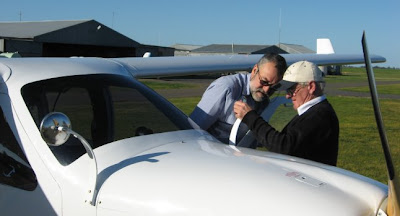 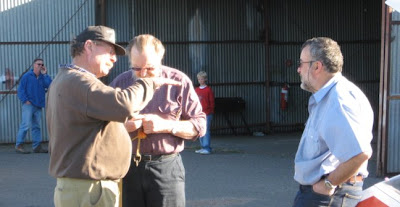 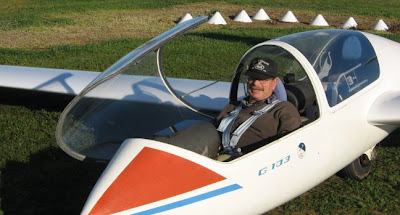 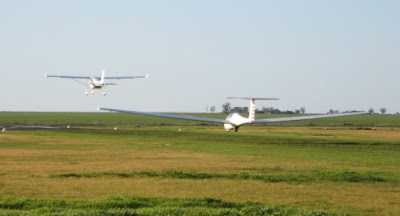 Posted by HFC Blog Editor at 7:45 am No comments: