Laurie Bunnik passed through Horsham on Good Friday on the way to the Biannual National Daimler Rally in Bendigo. Laurie has been working on his Dailer for many years now and came up trumps at the Rally winning two awards. Laurie and his pride and joy picked up the 'Presidents Trophy' and the 'New Zealand trophy' for the best presented Daimler. On Easter Monday Laurie again passed through Horsham on the way home to Casterton. He filled up on fuel and took PW and myself for a drive around the taxiway to the fuel bowsers to refuel. 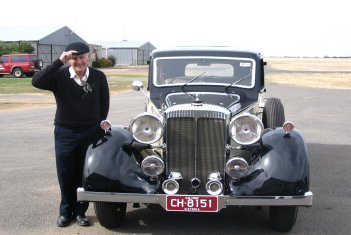 Mike got to ride around in the back as if he was the king. PW had to open the door for him. Peter makes a very good 'Jester'