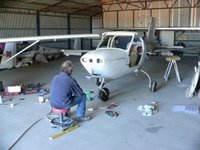 Work continues apace on Doug Brooke's J170 and Phil C's J230. On Melbourne Cup Day the club's Jabiru was out of the air so the engine could be taken out and fitted to Doug's airframe. Doug hasn't bought his engine yet so needed one to finish the alignment of his cowling's prior to painting. Don't worry we got our motor back. Phil said this was also a good opportunity to have a good look around our engine. Well I believe him and he's the maintenance officer. The work started at 11.00 and everything was back to normal by 8.00PM that evening. 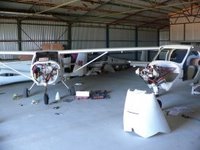 Doug has provided a few photos taken during the day. At the top Joe Luciani is checking the alignment of the cowlings on Doug's J170 after fitting the engine and in the bottom picture 0955 is on the left and Doug's J170 has the engine fitted to prior to aligning the cowls. Meanwhile Phil's J230 is progressing well despite going out and in the workshop as gliders go in and out for their annual inspections. Phil is currently working on the internal fit out of the 230 and last weekend commence wiring up his strobes and navigation lights. One step at a time each aircraft is progressing toward completion.