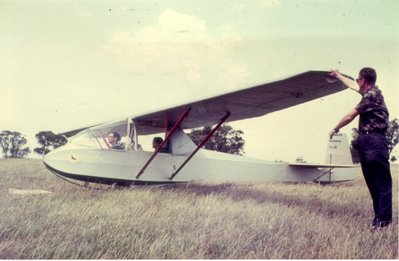 Max Hedt has provided some additional detail on this photo of the club's first glider, the T31 and some early club history.

The people in the T31 photo are Reg Stewart on the wing tip, waving "take up slack" and Tommy Thompson in the back seat. I Can't identify the driver in the front seat.

Judging by the trees and etc the photo was taken at our first "permanent site" at Lower Norton. This was on what was then Bill Walsh's property. This paddock was only used for grazing in those days as it was too wet for cropping. The site is across the Norton Creek, about 2 kilometers up along a bush track called the Smith Reserve Road, the turn off is on the south side of the Noradjuha road, about 5 kilometres from the Wimmera highway. Today there are still a couple of concrete blocks in the ground between the trees where we erected our first hangar. The trusses and materials from this hangar now comprise the middle bays of our small hangar on the airfield.

The club lasted at Walsh's for less than a year as it was a very wet area in winter and we were eventually washed out. We then moved to Alan Natrass's property at Kalkee on a temporary basis. While at Kalkee the club very nearly died as we were completely removed from the publics view and nobody knew we existed.

In mid September 1965 there was another move, this time on to Jim Molyneaux's property at Dooen. We removed the hangar from Lower Norton to Dooen where is was reassembled and extended. Immediately we moved to Molyneaux's we became very prominent along side the Henty Highway (Editors Note: I can remember stopping beside the highway while on a trip from Minyip to Horsham in the mid sixties to watch gliders being launched, I was about 4 at the time) and started to grow very rapidly.

Again we had to move, this time, after a lot of negotiation with the then Department of Civil Aviation, we moved into a permanent home on Horsham Aerodrome. There had been very strong opposition from a small group to us moving onto the aerodrome. But we did have some influential friends. Jimmy Green, the then Deputy Director of Civil Aviation to the Director, D.G. Anderson who was an old Waikerie boy, told me to my face while I was taking him back out to the airport after our negotiations had finished, "The D.G. has told me you are to go onto this bloody aerodrome and you had better make sure you make this bloody well work."

On the 14 October 1967, I have my first recorded glider flight at the Horsham Aerodrome. This was after we had moved from Jim Molyneaux's and again demolished and moved the hangar to it's present location. I often think that if we had similar exposure along the main highway in the years past we would have had much better success in attracting members but this would have been offset by the need to maintain our own field and would have meant much higher costs for any facilities.

I think there were about 3 hangars on the aerodrome when we moved there. Most of our members wanted to put the hangar fronting the taxiway. As there was already only limited room there, I convinced them to put the hangar in the present location. There was lots of room, to get our gliders out and mess around there without interfering with any other power traffic both then or in the foreseeable future. Facing the hangar to the east was also the best direction for our weather conditions. We put in the gate for our own use as the only access to the aerodrome in those days was via the terminal gates. The gate promptly got used as the main entrance by all and sundry around the aerodrome which has caused us a few minor problems. As it does to this day.