The Jabiru J230 has come out of the paint shop after having its new paint scheme applied. Many members may be aware that '5109' was delivered by Jabiru without any strips or decoration. The club decided to conduct a competition among local school students to develop a concept for painting the J230. After some delays the concept was expanded upon and modified to meet the clubs requirements.

And now it can be unveiled. The colours are the same as those on the J120, burgundy and gold. 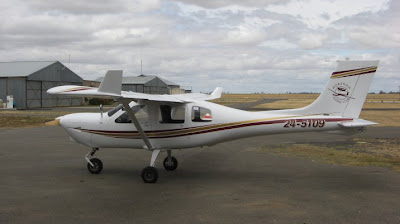 The club logo was also applied to the tail. Now where ever we go everyone will know where we are from. (Will this always be a good thing. Ed.) 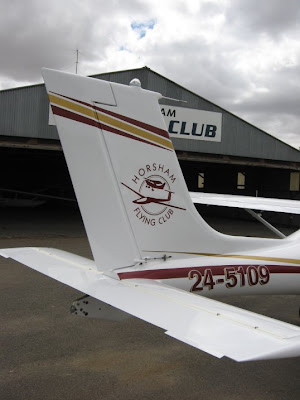 The 'Little Jab' also had the club logo applied to its tail fin. The last photo shows both aircraft outside the club hanger facing off nose to nose. This photo is the current image that welcomes visitors to the club's web site.