Gliders on track. Max has been working on the railway

Max Hedt has been busy working on a new track system to move the Janus and the Twin Astir in and out of the tug hangar (which is now the glider hangar and the old glider hanger is now full of power planes and the tug, so is now the tug hangar). Each glider will have it's own 'trolly car' and run in and out of the hangar on a track to a set point both inside and outside the hangar. 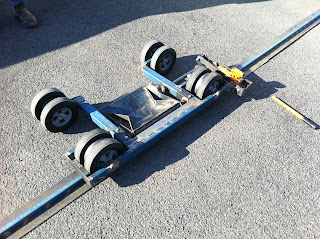 This system will allow one person to get a glider in and out of the hangar. The Pegase will still move in and out on it's existing free wheeling trolly. The system is not quite complete. Max is finishing off the 'trolly car' and tracks for the Janus. The tracks are made up of tube on a flat plate nailed to the ground. The 'trolly car' has a jack to life the glider up and down. Both gliders run easily along the track with only a minimum amount of push or pull required. The short video below demonstrates the basic operation of the 'trolly car'.


A better quality version of the video can be found here on YouTube
Posted by HFC Blog Editor at 4:42 pm