About 38 members and guest enjoyed a fine three course meal at the Glen Logan Restaurant on Saturday 19th August. A great evening was had by all who attended. The speeches were not to long and a number of certificates of solo flight were presented to Bill Fry, Steve Schneider, Doug Brooke & Wayne Jackson.

Michael Sudholz also presented some certificates of his own to Alan Dickerson and Michael Hogan. Alan received the 'Frequent Flyer Award' for so regularly coming out and flying in all weather and at all times of the day. Alan often nips of flying somewhere and reappears just on dusk. Michael Hogan received the 'You Did It Award' award for playing with Michael Sudholz's truck while he was off flying in the Twin and then locking the keys inside. The two Mike's then had to drive out to Natimuk in the second Mike's car to get the first Mike's spare keys. 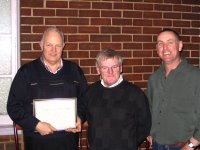 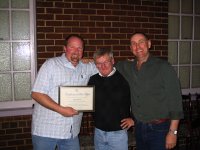 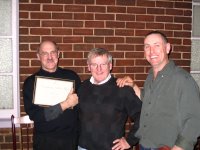 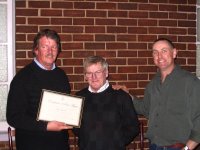