A First Solo...In A Glider

Its happened at long last PW has sent someone solo in a glider. Can anyone remember when this last happened. Well it finally happen last Sunday. Michael Sudholz had some final checks with Peter Kelly at Dadswells Bridge and with PW at Horsham and off he went, Mark did the tow and the small crowd saw his safely return to the field with just a slightly longer run down the North/South than on his previous flights. (Funny things those air brakes, sometimes the glider just won't stay on the ground when your trying to land) So well done Michael and welcome to the other club with in the club. The solo glider pilot club. 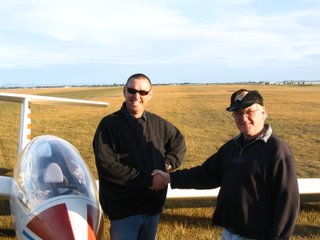